I’m not in school anymore, but I still like to learn about things. And I also like reading comic books, so I’m excited about the increasing number of nonfiction graphic novels. When done right, nonfiction graphic novels can be a great way to learn about a new topic in a fun, easily digestible way.  I recently read Economix: How Our Economy Works (And Doesn’t Work) by Michael Goodwin and Dan E. Burr and Trinity: A Graphic History of the First Atomic Bomb by Jonathan Fetter-Vorm. I’d say their titles give you a pretty clear idea of what both books are about–how the economy works, and a history of the first atomic bomb–and neither subject was one that I knew very much about. They’re both somewhat intimidating topics to dive into, and I thought a graphic novel would be a good way to get a good introduction. I was right, although one of these books does a better job than the other.

I was wary about picking up Economix–I know very little about economics, and it’s honestly a pretty boring topic to me. I imagined reading this would be the literary equivalent of steamed broccoli… good for me, but a struggle to get through the whole plate. But I was amazed to find out that it was more like broccoli with cheese sauce. It was delicious, and I ate it really fast. I know, I know. I couldn’t believe it either, but it’s true! Economix is narrated by a little cartoon version of the author, Michael Goodwin. Cartoon Michael says up front:

I have myself narrating, [because] this book is my take on things economic, for better or worse. For instance, while I tried to cover the whole world, I focused on the economy of the United States, because I’m an American and that’s the economy I live in. For that matter, every book on the economy is someone’s personal take on things. So don’t treat this book–or any other–as gospel. If something seems wrong, it’s never been easier to check facts, find other opinions, and think things through yourself.

I loved that he started off that way! What a smart, transparent way to go about things. He also notes early on, “In this book, direct quotes will be in italics with quotation marks. Otherwise, I’m, um, putting words in people’s mouths.” I appreciated that he made this so clear early on. Also, a lot of the times when he “put words in people’s mouths”, it’s to comic effect, such as a cartoon of Adam Smith shouting “Down with the man!” Economix is a clear and concise explanation of how our modern-day economy came to be and how it works, and it’s admirable how well Goodwin is able to explain such complicated concepts. It’s also an unexpectedly funny book. I would really recommend it to anyone, since it’s a great introduction to a complicated topic that impacts all of our lives. 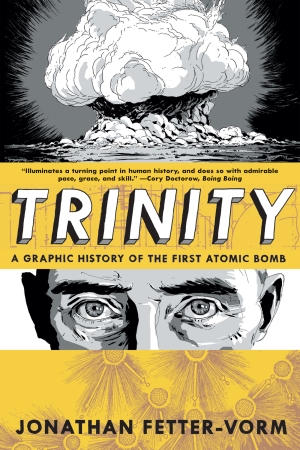 I also learned a lot from Trinity, but having read it after I read Economix, I have a bit more of a rant about it. Remember how I mentioned that in Economix, Goodwin was very clear about when he was directly quoting historical figures, and when he was paraphrasing? In Trinity, there was no indication either way. I found this very frustrating! It’s shocking to read President Truman calling J. Robert Oppenheimer a “son of a bitch,” but there’s no attribution. Did he really say that? I don’t doubt it, but… when? Hmph.

That said, Trinity does a great job of explaining the concept of nuclear fission, with some really helpful illustrations. I have to be honest and say I’d never really thought about how “splitting the atom” actually worked, and now I… kind of know. It’s also a quick read and a compelling story of scientists coming together in wartime, as well as the odds they were against.

Still, overall, Trinity serves as a good introduction to both the scientific and political history of the atomic bomb. I’d recommend supplementing it with works like Hiroshima by John Hersey or Bomb by Steve Sheinkin, or any of the other books Fetter-Vorm recommends in his author’s note.

Recommended to: I’d recommend Economix to just about anyone; Trinity for those who want a quick intro to the history of the atomic bomb, particularly the scientific aspect of things